From Wolcen: Lords of Mayhem Wiki
(Redirected from Spells)
Jump to: navigation, search

The skills in Wolcen: Lords of Mayhem are divided up between active and passive skills.

Active skills are regular magic spells, or special melee moves a character will use. They usually have a Rage or Willpower cost, with others utilizing charges or having a long cooldown period.

Active skills are found in the game by using Enneracts found as drops or purchased from the Archivist. When a character uses an enneract, it is destroyed, and they gain the new skill. This skill will level up so long as it is equipped while you kill enemies, or you can spend your primordial affinity at the Archivist.

Each active skill has 16 modifiers that can be applied to it. These modifiers, as well as the points required to apply them, are unlocked as the skill levels up. A modifier can cost 1 to 3 points, with more costly modifiers generally being more unique and powerful. Skill modifiers may be reallocated at any time.

During endgame, the player can unlock the ability to duplicate skills, allowing for multiple copies of the same skill with different multipliers applied. 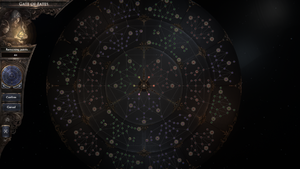 The Gate of Fates screen with no points assigned.

Passive skills are acquired from the passive skill tree(also referred to as the Gate of Fates), which takes the form of three concentric circles, each holding many passive skill nodes.

The player acquires one passive skill point per level(excepting level 1), which may be assigned to any node connected to the center of the tree or to an already assigned node. The layout of the skill tree is not completely fixed: using the miniature representation of the tree on the left side of the screen, the player can rotate each of the three circles making up the tree, allowing for the connections between regions to be customized.

Each node is either a minor node(which have smaller, more common effects) or a major node(which have unique, or at least more powerful effects).
An example of a minor node is "Unstoppable Fury," which gives +12% All Projectiles Damage and +10% Attack Speed Score
An example of a major node is "Archion's Teachings," which makes all projectile attacks and spells fire an additional projectile, but reduces each projectile's damage.