There are multiple different types of monsters players can face when playing Wolcen.

A level 17 caster found in Anankis' Hall. Spawns in groups with other Sorcerers.

He casts slow moving bolts of lightning, aether, and a third toxic attack that has a water splashing sound effect.

He can apply shock, stasis, and poison to the player.

He spawns with 6,282 health and a crowd control bar that can be depleted in order to stun him. 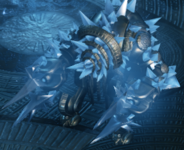 It uses a variety of area of effect and straight line attacks that can quickly decimate a player too slow to move out of the way. 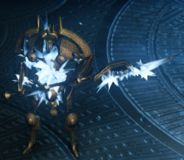 A level 18 enemy found in Anankis' Hall. that falls into a crumpled state when it reaches 25% of its maximum health.

When this enemy reaches 25% of its maximum health it falls into a crumpled state and receives reduced damage.

If the Armor is not killed quickly enough it will respawn with full health and increased attack speed, making it a deadly adversary.